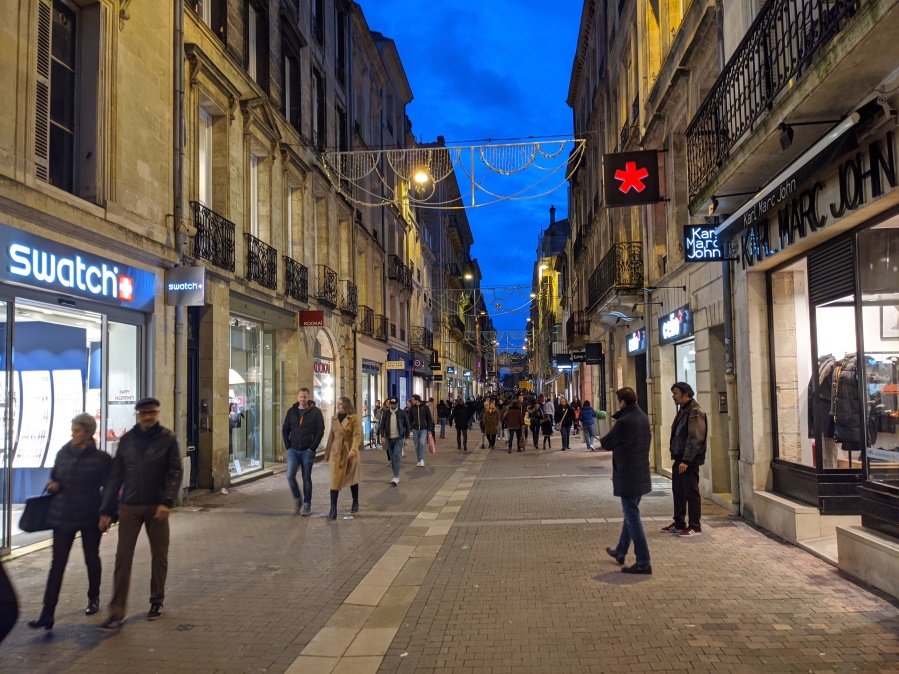 When I planned this trip, I left one weekend free for a spontaneous adventure anywhere in France. As luck would have it, Valérie Bénaim, my favourite French TV host, author, blogger (and now YouTuber) announced that she would be hosting a book signing in Mérignac, near Bordeaux. I had read her latest book, Kiffeuse en série, a few months earlier. In her book, she talks about her life and shares her tips for leading a happy existence. It’s exactly the type of light-hearted feel-good book that I enjoy reading. I was thrilled to have the opportunity to have my copy signed.

Dad and I took the TGV from Oulx, a town in Italy near Serre Chevalier, to Paris, then another TGV from Paris to Bordeaux. I had booked a hotel in Mérignac within walking distance of the bookstore. To get to our hotel, we used the cheapest but least luggage-friendly mode of transportation available: the city bus. The bus was super crowded, but we manged to play suitcase tetris and arrange ourselves so that we took up only two seats. We felt like such good, considerate travellers.

I woke up in Mérignac the next day feeling incredibly excited. I was finally going to meet the person that I had been following on Instagram and on Touche pas à mon poste (more about that in the next blog) for over four years. I spent the morning hanging out at the hotel room with Dad. We played with Speak & Translate, a translation app. You can speak into the microphone in English, and the app automatically translates your statement into whatever foreign language you choose. We played around with English-to-Czech translations. The app did well with simple sentences, but it got very muddled when I tried “To be, or not to be, that is the question.” Basic phrases good, Shakespeare, not so much!

I also spent some time contemplating what I was actually going to say to Valérie. It sounds silly, but I was determined not to make a fool of myself. I kept thinking of Odette Toutlemonde, a French-Belgian comedy film that I saw when I was living in Quebec City in 2007.

At 0:21, the main character, Odette, shows up to get her book signed by her favourite celebrity author. She feels so overwhelmed that she can’t even say her name properly. I feel great affinity for this character. I’ve encountered a few celebrities, including Alan Doyle (from Great Big Sea), Kate Middleton, Prince William, Prince Charles, Camilla Parker-Bowles and Raffi. During each encounter, I struggled to say anything coherent and just ended up giggling uncontrollably. I wasn’t going to let that happen this time. I also had the added challenge of trying to be a normal human being in my second language.

That afternoon, I walked nervously over to the bookstore. I arrived only a few minutes before Valérie showed up. I was surprised when she walked in on her own. I thought celebrities usually travelled around with security and publicists and all that jazz. But no, she just casually strolled in and said “Bonjour” to all of us waiting in line. She seemed very down-to-earth. She went into a backroom first, and I had a little pep talk with myself while waiting for her to return. “Be cool. For heaven’s sake remember your name. Remember how to speak French. Don’t start giggling. Just, be cool goshdarnit!” During that short wait, I somehow managed to get my belt loop tangled in my purse. Luckily, I got myself sorted out before she came back out and sat down at the table.

I was first in line, like a proper keener. I went up to her and said “Bonjour” (good start!) and handed her a packet of Cheetos that I’d brought from home. In her book, she describes how Cheetos are one of her favourite snacks. I know that you can’t buy them in France, at least not at a regular grocery store. She seemed pleased and she asked me whether I was American. I told her that I was Canadian, and she said that she had family in Toronto. She also stood up to come give me “la bise,” or as I call it, “the cheek-bump-kissy-kissy.” We never use the gesture as a greeting in (English) Canada, so each time I’m in France, I need to adapt to it all over again. When Valérie approached me, my instinct was to panic. “Oh no, which cheek do we bump first again? Isn’t it the opposite cheek in Quebec? Wait, just relax, follow her lead, you’ve done this before, you got this.” For the record, in France, you bump right cheeks first. And I managed just fine. Phew.

Valérie said “so you’re living in France now, I imagine.” I shook my head no, and she looked stunned. “Oh boy,” I thought. “Hopefully she doesn’t think I’m an over-the-top fan who crosses the Atlantic just for a book signing announced only a week ago!” She told me that she was very touched, which made me feel awesome. I hastily informed her that my impromptu trip to Bordeaux was part of a much bigger journey through France, the Netherlands and the Caribbean. I also told her that I would be attending the taping of her shows in the Parisian region in two days. When she signed my book, she wrote the following:

I don’t think she realized how accurate the “big traveller” designation is for me. She only knew about my current trip! Anyway, I was incredibly pleased with the autograph. I told how her how much I had enjoyed the book and how it always put me in a good mood. I also said “thank you so much” in English, to make sure she knew that I could speak at least one language without a painfully obvious foreign accent. She said “you’re welcome!” in English, and I said goodbye. I walked out of the store with a huge smile on my face, and sauntered back to my hotel, grinning away.

Here’s the part of the blog where I would normally insert the photo that I took to memorialize the encounter. Except…I forgot to take one. Oops! Sometimes, I sincerely regret not having a photo. Valérie looked lovely and my hair was behaving itself (for once!) But most of the time, I don’t really care all that much. The whole point of going to the book signing was to have a conversation with her, and in my view, we had a great one.

Dad and I took the bus back into Bordeaux that afternoon and spent a few hours wandering around. Bordeaux is an excellent walking city with lots of pedestrian streets. I did some shopping and found a cheap but nice sweater to wear to the Touche pas à mon poste taping. One hazard of going to the show is that on some occasions, the panelists and the audience get sprayed with (fake) chocolate. I wanted to avoid wearing my nicest clothes.

We went into the Bordeaux Cathedral, where we came across the following sign: 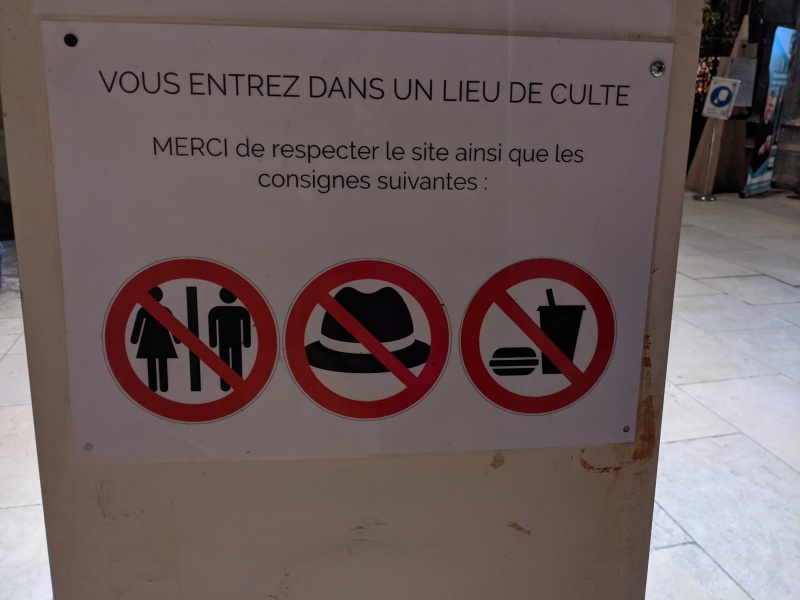 Okay, so I understand no eating or drinking and no hats…but what on earth is the first image telling us not to do? If anyone has any idea, please tell me in the comments. Quite frankly, we were stumped.

Since Bordeaux is close to the sea, Dad and I opted for a seafood dinner that evening at Cabane 101. It was absolutely scrumptious! Everything was mouth-wateringly delicious.

We took the bus back to the hotel in Mérignac, and we both fell asleep very quickly. Now here is where an otherwise lovely weekend turned a bit dramatic.

First, the back story. When we had checked in to our hotel the day before, we went to the front desk in a separate hotel, which had a 24-hour reception. Our own hotel building didn’t have a reception. It had a day-time front desk, but no employees on duty at night. We could freely enter the building without using a key or code. Our room was on the first floor, right next to the stairwell. The door to our room did automatically lock, but otherwise, the security was terrible. That said, I wasn’t particularly concerned. Our part of Mérignac looked like an average North American suburb, the type of place where nothing much happens. This was the view from our window: 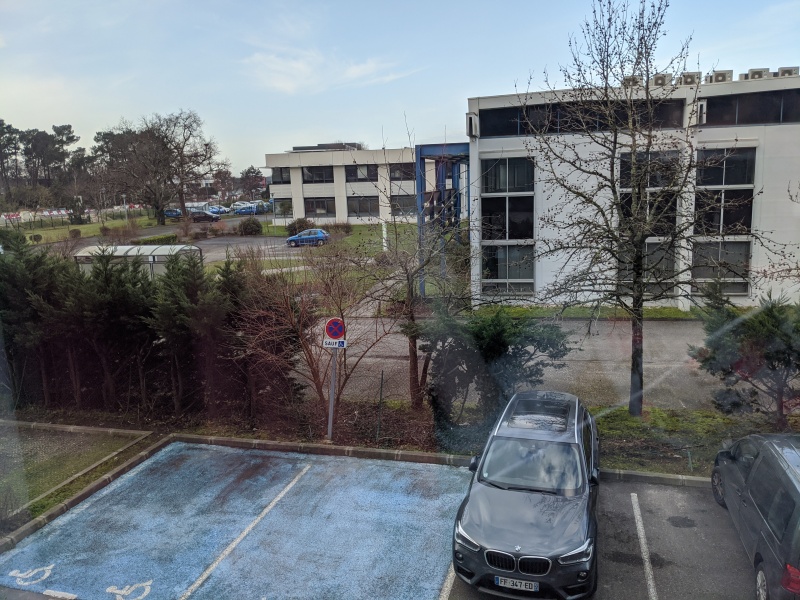 Now, the incident. At about 2 a.m., we were both startled awake by a group of drunk people shouting and carrying on in the parking lot. At different times, we looked out our window, but the drunks didn’t catch sight of us. We didn’t bother trying to shout at them. We just lay back down in bed and waited for them to leave. And they did leave, eventually, and it was quiet for a few minutes. I was almost back to sleep when, all of a sudden, there was tremendous banging on our door. I instinctively curled up in the fetal position on my bed. Dad jumped up and stood at the door without touching it. BANG BANG BANG BANG BANG, we heard. “GET LOST YOU DRUNKS!” my Dad shouted, in his big booming voice. There was a pause, then I heard a voice say “Nik omok!”, which is Arabic for “Eff your mother.” We heard even more banging, harder this time. Then silence. Neither of us said anything. Dad stood frozen in front of the door and I stayed huddled on my bed. Dad then went to the window, and he saw four men pile into a car and speed off. My heart was beating out of my chest, and it took forever for me to finally doze off for the rest of the night.

I woke up the next morning still feeling shaken, and Dad and I debriefed the incident. He thought that they had been banging with something other than their fists, a weapon maybe. He tried banging the door with his own fist and it didn’t make quite the same sound. We also determined that the people who banged on the door weren’t necessarily the drunks in the parking lot. Dad believed that the door-banging people arrived after the drunks had left. The door bangers may not have even been drunk themselves. I wondered what could possibly have been the point of their actions. Did they want to wake up random strangers, swear at them and then drive off? That’s the best case scenario. Maybe they wanted us to open the door and then…ugh, I don’t want to go there. If they had somehow gotten into the room, they would have come across an elderly man and a defenseless woman. Easy victims.

When we went down to breakfast, we told the nice man at the front desk what had happened. He seemed very apologetic, but we reassured him that it wasn’t his fault. He wasn’t in charge of security at the hotel. Dad and I then took the (thankfully empty) bus with all our bags to the train station in Bordeaux. Shaken but not stirred, we hopped onto a TGV to Paris for the next leg of our journey.

One thought on “Bordeaux”