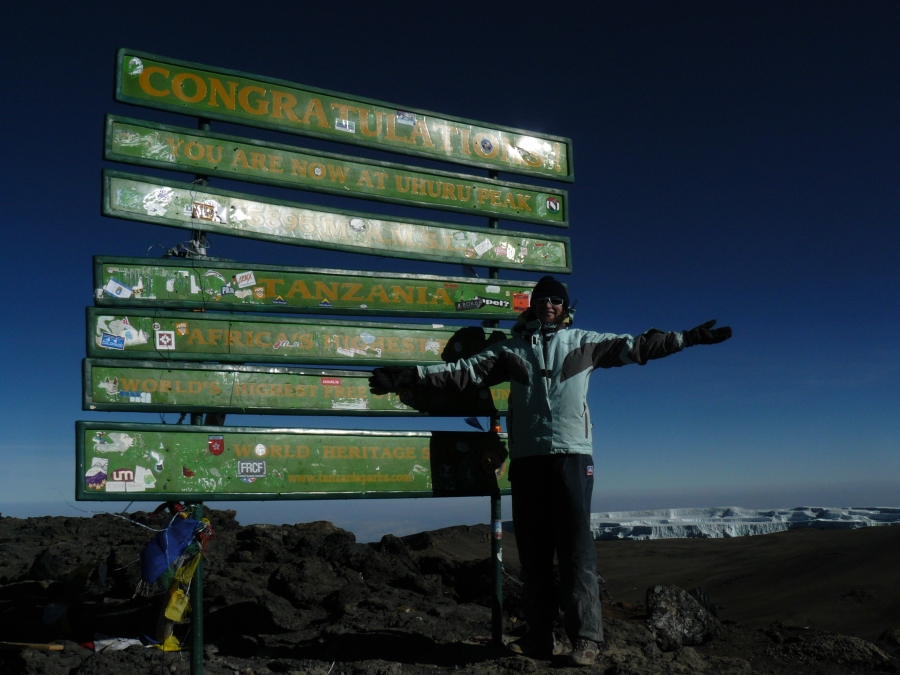 The idea of climbing Mount Kilimanjaro had been floating around in my head for a few years, but it really started to take hold when I was in New Zealand talking to other hikers. I learned that you didn’t have to be an experienced climber to reach the summit, and that it was a beautiful but challenging hike. I like a challenge 🙂

When I was in Berlin in June, I looked online and found an Intrepid tour that combined both a safari and a Kili climb. It seemed ideal, so I quickly signed up. It was only then that I started actually researching what I had gotten myself into. I learned that if you took a five day route (which is what I would be doing), you had only about a 50% chance of actually making the summit. It has nothing to do with age or fitness level, and everything to do with how you personally react to altitude. Some people merely get very tired, while others develop life-threatening conditions. You have no way of knowing how you will react until you attempt the climb. Your chances of success increase if you take longer and move more slowly, or if you climb another mountain right before Kili. I now have enormous respect for anyone who even tries to climb Mount Kilimanjaro, whether they reach the top or not. Everyone on that mountain has invested a minimum of $1,200 (and often twice that amount or more) into their climb, so a decision to turn back will never be made lightly.

Before starting the climb, we spent the night at the Marangu Hotel at the base of the mountain. There were nine of us in total, six from the safari and three others who had arranged their climb through the hotel. I would recommend the Marangu Hotel to anyone climbing Kili. It was wonderful to spend one night in a comfortable hotel room before braving the mountain, and the food at the restaurant was delicious. They had a huge storage room filled with gear that we were free to borrow, and we were given an excellent briefing by a hotel employee. The nine of us were supported by a team of five guides and a cook. The head guide had over forty years of experience on the mountain! We also each had a porter to carry our bag.

The first day’s climb was quite easy. We hiked up through the rainforest to the Mandara Huts. The guide set a very slow pace to help us acclimatize. As we walked along, we kept crossing paths with people coming back down the mountain who would tell us “good luck” as they passed. We were also sobered by the sight of an ambulance racing down the road and a man being carried along the path in a stretcher (though we found out later that he’d apparently only chipped a tooth). The cook made a fabulous dinner, and I was thrilled when he gave us popcorn as a snack. We spent a comfortable night in the triangle-shaped huts, listening to the monkeys screeching outside our doors.

We were all taking the drug Diamox, which is supposed to help speed up the acclimatization process. It has some unfortunate side effects, however. It’s a diuretic, and we were constantly drinking water and tea, so we always needed to go! It also makes your hands and feet tingle. 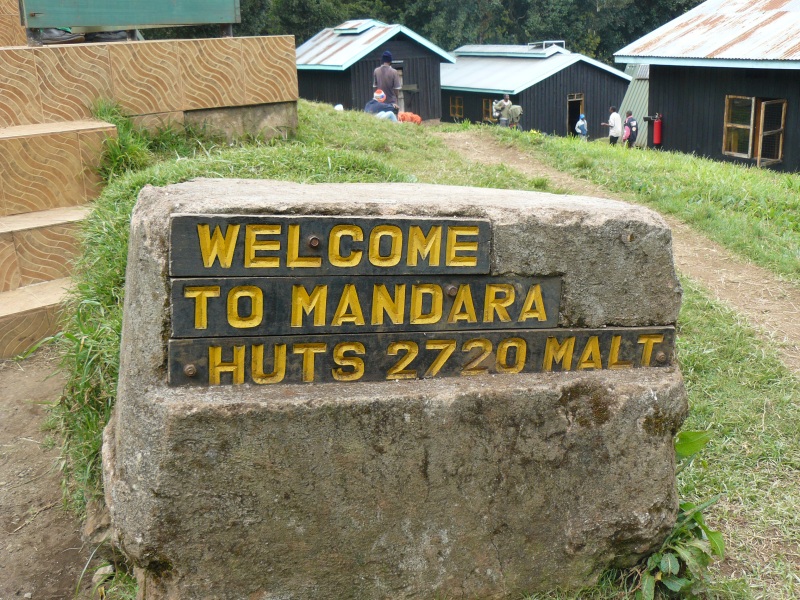 On the second day, we hiked to the Horombo Huts. We rose above the clouds, left the forest behind, and got our first good view of Kilimanjaro. By the time I reached Horombo, my legendary appetite had evaporated, which was the first sign that I was suffering from the effects of altitude. I forced myself to eat, but I did not enjoy it.

On our third day of climbing, we hiked over the saddle to the Kibo Hut at 4703 m. On the plus side, I enjoyed chatting with my hiking companions as we trekked along. We had an amazing view of Mawenzi Peak, and the weather was bright and sunny. On the minus side, I started getting increasingly nauseous as the day went on, and I noticed that my pulse was racing even at rest.

At Kibo, even going from the building to the toilets took an enormous amount of energy. I tried hard to eat as much food as possible, but I felt so sick. I attempted to get some sleep that evening, but I just couldn’t get comfortable.

We started our ascent to the summit just after midnight. The first hour of the climb was a disaster for me. I had started with too many layers and began overheating. The tube on my camel pack froze (I had originally intended to carry the pack down the front of my jacket and to keep it warm using body heat, but I couldn’t secure it properly. When it froze, it was like I was carrying a block of ice. Luckily, I had brought alternate water bottles.) My headlamp burned out. The waves of nausea kept getting worse and worse. I had to fall back from the rest of the group, and one of the assistant guides, Harold, became my personal guide. I knew that it was only a matter of time before my nausea would reach a breaking point. Luckily I was able to step away from the path on time! Being sick was a double-edged sword. On the one hand, the nausea subsided, though it never completely went away. On the other hand, in one fell swoop, I had deprived myself of nutrients that I desperately needed to complete the climb.

I pushed on up the mountain, still incredibly determined to make it to the top. I can be very stubborn when something is important to me. Harold set an extremely slow pace, and told me just to keep following his boots. The ascent was quite steep, and we followed a zigzag path through the scree and the boulders. I had to concentrate so hard on simply putting one foot in front of the other, and we took a slight pause after each step. I kept looking at the thousands of stars lighting up the clear night sky and thinking that if I weren’t feeling so awful, I would be appreciating the magnificent view. Harold sang songs like these to me and encouraged me the whole way up. He told me that he thought I was strong enough to make it. He even carried my day pack for me. I will forever be grateful to him!

We reached Gilman’s Point, at 5,681 metres, just as the sun was rising. The rest of the group had arrived about fifteen minutes earlier. I felt intense relief at having made it that far, and a firm desire to go on.

It took me almost two hours to reach Uhuru Peak from Gilman’s. I found that I could move relatively quickly along the flat parts of the trail, but that any uphill portion was murder. I would climb for a bit, then a wave of nausea would hit me and I’d collapse. After a few moments of rest, I would try to get up and the effort would bring me right back down to the ground. At one point, I was curled up over some rocks, coughing and dry heaving. I wasn’t the only one suffering. Everywhere I looked around me, people were struggling to take that next step. I was thrilled to finally reach the peak (5,895 m), but I certainly didn’t want to stay very long!

On the Marangu route, you go up and down the mountain along the same path. Although walking up through the scree had been somewhat tricky, I had so much fun “skiing” down it. My feet would get buried under all the rocks as I slid and skidded down the mountain.

As I moved down the trail in the daylight, I kept seeing pieces of toilet paper everywhere. I was not the first nor would I be the last person to get sick on that mountain. I reached Kibo Hut at about 11:00 a.m., and fell into my bunk. The nausea had calmed down considerably at that point, but my stomach was still doing somersaults. I managed to choke down lunch, then we all hiked 15 km back to Horombo. At that point, my entire body was screaming “enough!!!” I felt quite sick, almost feverish, before I went to bed. I slept very well regardless, and felt much better when I woke up. On the last day of the trek, we walked 27 km all the way back to the entrance gate.

When I got back to the hotel, I took the best shower of my entire life. The dirt didn’t completely come off, however, until I got into the bath, took a towel and used every ounce of remaining energy to scrub myself down. We had a fabulous celebratory dinner that night, and it was wonderful to feel genuinely hungry again.

I took a shuttle bus from the hotel back to Nairobi, where I stayed at the Wildebeest Eco Camp again. It was a wonderful place to sit and relax all day, and reflect on what I had just accomplished. Although I had imagined a triumphant ascent to the top of Africa, I think I looked much more like the guy at 4:08:

I thought about whether I would climb Mount Kilimanjaro again, and the answer was probably not! But would I recommend that other fellow amateur hikers attempt the climb? Yes I would! Despite the extra expense, I would choose a six or seven day trek. Your trip to the summit might be less miserable than mine was, although there are no guarantees. But even if you only attempt to climb the mountain, you are sure to have a great adventure!