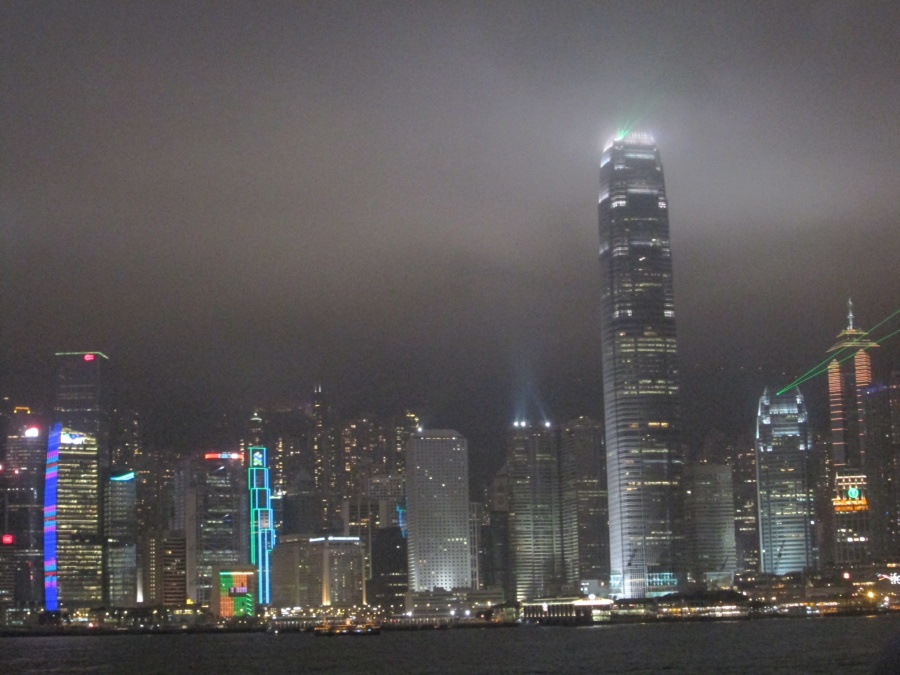 For my fairly brief stopover in Hong Kong, I had three main goals:

I am delighted to say that I accomplished all three!

I had been mulling over the possibility of jumping off the Macau tower ever since doing the Nevis in New Zealand. While the wait for the bungy in New Zealand was TERRIFYING, the jump itself was awesome. The only thing really stopping me this time was the cost, but I decided that I couldn’t miss the opportunity. Who knows when I’ll be in Hong Kong again?

This time, I wasn’t scared at all. Well, my heart was pounding a little, but to be honest, there are many other things that make me much more nervous (like the moment before I go on stage at a Ukrainian dance show, or driving in Los Angeles, or experiencing turbulence at 40,000 ft in an airplane …) There was hardly any buildup for this bungy. I arrived at the tower, and about fifteen minutes later, I jumped. I was the first jumper of the day. The jump was a little different this time. Instead of leaping forward, I was more or less “released.” Next time, I’m doing it backwards! What was going through my mind as I stood on the edge of the tower? I was thinking, “this is going to be great!” and also “I wonder if the locker key on my arm will fall off?” (it didn’t). The rush from the jump was unbelievable. The freefall felt longer and faster than the Nevis, and I remember it better. After my jump, I had to go back up the tower to get my stuff, and as I came out of the elevator, I got a huge round of applause from all the tourists who had watched me. That felt nice, since I was all alone for this experience.

Note the key around my arm … 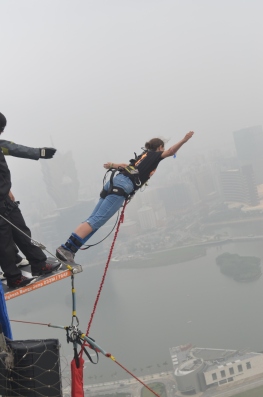 Plunging toward the city

Here is a video of my glorious saut à l’élastique:

I walked around Macau for a bit after leaving the tower. So many casinos! It’s the Vegas of Asia! Very cool, but really not my thing.

That night, I took the Star Ferry with a guy from my hostel over to Kowloon to watched the Symphony of Lights show, a light show set to music featuring the Hong Kong skyscrapers along the waterfront. So cool! We also walked down the Avenue of Stars, and I recognized no names apart from Jackie Chan and Bruce Lee.

The next day, I was on the prowl for good dim sum. The lady at the hostel directed me to a fantastic place, Tim Ho Wan at the Hong Kong station, where I feasted on various delicacies such as pork and shrimp dumplings. I also seized the chance to wander around the city and stare up at the skyscrapers. Yea for delicious food and crazy tall buildings!

That night was a lot of fun. I took the Peak Tram to the top of the city to get a good view. The only problem? It was monsooning outside! There was no view to be had. But I loved the steep, fast and rickety tram ride anyway 🙂 Anything that even vaguely resembles a roller coaster is always good in my books. I think I might be an adrenaline junkie …

I went out later with my dormmates from the hostel. We walked down Lockhart Road to find a bar. We decided everywhere was too expensive, so we bought beers at the 7-11 and drank outside. Well, everyone else did. I still hate beer. (There is a nifty shot of our group on my dormmate’s blog, three pics down). We then took a taxi over to Soho, and walked around for a bit. The bars were jam packed. There was even a Canadian bar! I enjoyed watching the crazy drunken antics of huge crowds of young foreigners. I even managed to pull an all-nighter and caught an early flight to Tokyo!

2 thoughts on “Hong Kong and Macau”