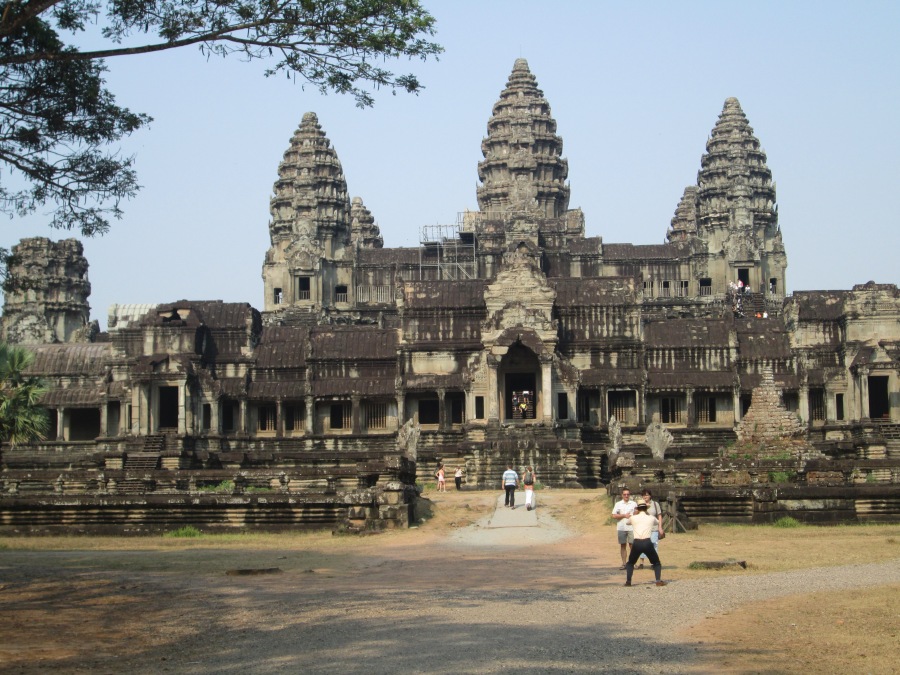 After a relatively relaxing few weeks in Laos, I decided to brave the madness that is Cambodia. Crossing the border from Laos into Cambodia was interesting, to say the least. The drive to Phnom Penh took about eight hours. We were supposed to be on a nice, air-conditioned bus with a toilet and comfy seats. Instead, they overbooked the nice bus, and put most of us onto this horrible bus with leather seats, ineffectual air conditioning and no toilet. People who were getting off in Kratie had to either sit on stools or stand in the aisle. The bus driver, who looked like he had just turned sixteen, drove like a complete nutcase. He seemed more intent on texting, chatting on his phone and watching the movie than actually looking at the road. The bus kept swerving violently from side to side as he blared on the horn. Somehow, we made it to Phnom Penh in one piece!

Phnom Penh reminded me a lot of Bangkok. It was noisy and dirty, but it had delicious food. Right around the corner from my hostel on the riverfront were some amazing restaurants. I indulged in Western food (since my food poisoning incident, I have had to lay off the Asian food a bit) and fabulous ice cream.

I decided to visit the Killing Fields. I already knew the basics of what had happened during Pol Pot’s reign of terror, but now I know the specifics. The place is kept in pristine condition and it is so peaceful. It’s hard to imagine the horror of what happened there until you see the layers of skulls and clothing in the memorial stupa. There is one glass case in which children’s clothing is prominently featured. I am glad I went, but it’s going to haunt me forever. I decided to skip the Genocide Museum, because I was already having difficulty processing what I had learned at the Killing Fields.

I headed instead to the Russian Market, a maze of stands under one gigantic shelter. I didn’t particularly enjoy shopping in Cambodia, because the shopkeepers are incredibly aggressive. There is no such thing as browsing in peace. It’s exhausting. The tuktuk drivers are also extremely annoying. They lie and say things are closed so that they can take you to their friends’ businesses or guest houses.

My bus to Siem Reap was absolutely beautiful. Air conditioning, toilet, lovely seats. I really appreciated it! I enjoyed exploring all the temples for one day. It’s hot and sweaty work walking up and down all those stairs and dodging other tourists, but it’s so rewarding. The adventure-seeker in me loves to be able to climb all over things and get up close to magnificent ruins, rather than just look at them.

In Siem Reap, I also visited the Cambodian Landmine Museum. The Museum is also a relief facility where children who have been affected by landmines or who are from poor families can live while they attend school. You can read some of their stories and see their incredible artwork. We were given a tour by an American man who has devoted the past decade or so to helping clear landmines in the country and to working at the facility. He was a wealth of information, and he was the one who nominated the founder of the museum, Aki Ra, for a CNN Hero award in 2010.

Every night in Siem Reap, I would wander down Pub Street and through the Night Market with whoever I had met at the hostel that day, looking for places to eat dinner. I found many fabulous restaurants, but my favourite was the Khmer Kitchen Restaurant. It turned me right back on to Asian food 🙂 I also indulged in ice cream from the Blue Pumpkin every single night.

I had done my research beforehand, and I managed to avoid getting scammed by anyone except for tuktuk drivers. Two big scams in Siem Reap are as follows:

An adult with enormous sad eyes walks through the street holding a baby and saying “Milk! Milk! I need milk for my baby!”. Tenderhearted and naive tourist goes to buy the lady a tin of powdered milk. The lady then sells the milk back to the grocery store and splits the profits. The grocery store owner keeps selling the same tin of milk over and over again. Sometimes, it’s kids who latch on to the arms of tourists yelling “Milk!” and won’t let go. When you refuse, they pinch or kick you, and of course you can’t do anything to defend yourself. It’s a nightmare.

This one is really sad. The American guide at the Landmine Museum explained it to us. The parents/relatives/guardians exploit the children. They keep the kids out of school to sell bracelets or guidebooks. Sometimes, the kids will borrow uniforms and show fake school books to ask for money for their “schooling.” The truth is, once those kids are no longer cute, they have no education or skills so their only option is to sell themselves. The guide told us to never, ever buy from them and instead to give money to organizations that help those kids. I took that advice to heart.

This article explains it well.