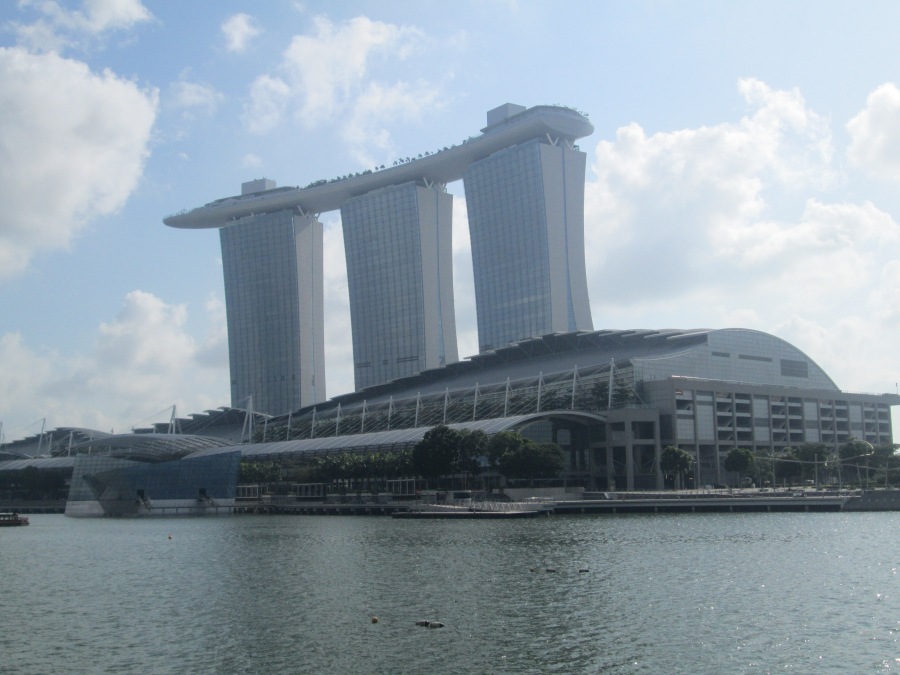 I got off the plane in Singapore dazed and jet lagged, and stepped into the cleanest country that I have ever seen. The MRT (no eating or drinking or smoking or littering allowed!) spat me right out into the heart of Chinatown, and I made my way to my hostel. I was thinking two things. One, “the overall emptiness of New Zealand made me forget how many people there are in the world,” and two, “I need to get in a swimming pool. Right now!” More on that later…

I decided to get up early the next morning to beat the heat. Alas, I was unsuccessful. There is no beating the heat in Singapore. I will have to get used to this! I headed over to the Marina Bay Sands resort to have a view of the city and the amazing infinity pool. Unfortunately, you have to be a guest at the resort to actually swim in the pool. It was a bit torturous watching people swimming as I baked in the sun! But it’s such a cool structure that it was worth it to have a look.

Lunch in Little India was incredibly tasty. You can get fairly substantially sized meals in Singapore at hawker centres for $3 to $6 dollars. The centres are all required to keep a certain standard of cleanliness, so you know the food is safe to eat.

Chinatown made my head spin. Since it’s close to Chinese New Year, the place is even more busy and crowded than usual. There is so much to take in at once! I also got my first whiff of durian fruit (not allowed in trains or hotels!), and I did not care for it. I actually saw a group of people decide not to eat at a hawker stand because it “smelled funny.” They didn’t realize that the stench was the fruit at the next stand!

When you eat at the Maxwell Food Centre in Chinatown, you wind up sitting with random people at little round tables. The little girl at my table, after watching me try and fail to eat with chopsticks, got up and brought me a fork! Awwwww 🙂

There is a vast underground shopping world in Singapore, similar to Montreal. The only difference is that in Montreal, the mall was built for people to escape winter, while in Singapore the air-conditioned shops are a welcome relief from the perpetual summer and the occasional tropical rain. I had a walk down Orchard Road, where all the high-end stores are located. Very snazzy.

I went to the Night Safari with two guys from my hostel, one Japanese guy who spoke Mandarin but hardly any English, and a Taiwanese guy who spoke very little English as well. Somehow we managed to communicate! The safari was neat, but I was a bit disappointed. The concept is interesting, and it’s cool to see nocturnal animals in action. However, it’s sometimes very hard to spot animals during the day at the zoo, let alone at night! I did like the open concept aspect and how some animals came right up to the tram, but I’m not sure that the safari lived up to my expectations.

It’s much more pleasant exploring Singapore by night. The city lights are amazing, and the temperature is somewhat more bearable. Clarke Quay and Boat Quay on Saturday night were jam packed. I went over to the Raffles Hotel to try a Singapore Sling, a very tasty but ridiculously expensive cocktail that tourists have to cross off their lists.

My favourite activity by far was visiting a local public pool. I heard admission fees were one to two dollars for pools in Singapore, so I did a quick google search. All I wanted was a place to swim a few laps and get refreshed! I found the Jurong East Sports Complex, right on the MRT line. Not only was there a regular pool, there was also a giant wave pool, three waterslides, a lazy river and a jacuzzi. Sold! I spent a delightful afternoon paddling around and shooting down the slides. I only wish someone had been there to share this particular experience with me. I kept thinking of all my friends (Katrina!) who would have loved it.

Singapore was definitely worth the visit!

I think it would be a funny to keep a log of all my mishaps, clumsy moments and dramatic incidents. It would look something like this:

December 24, 2012: Slammed my head on a microwave while trying to pull out my food bag. Lay on the floor of the kitchen in agony for a full three minutes while everyone looked at me (and tried to help!) Lovely scratch across my forehead.

January 4, 2013. Did a spectacular star jump while abseiling, then smashed face first into the rocks. All caught on camera.

January 14, 2013: Scored a delicious bruise on my leg courtesy of the Luxmore Cave. Sorry cave! Didn’t mean to brush against you!

January 16, 2013: Got electrocuted when trying to pull my adapter off the power bar and it came apart in my hand. Yowza!

January 19, 2013: Tripped and fell while wearing my pack. Ouchie. So much extra weight!

January 22, 2013. Acquired at least five new bruises from sailing. Legs are beginning to look as battered as when I worked at Camp Otterdale.

February 3, 2013. Had a panic attack! The totem from Jungle Speed was missing! Unpacked bag, threw clothes everywhere, started to mourn the loss of yet another precious object. Then, I found it under a bed. Crisis averted!